"Though both are bound in the spiral dance, I would rather be a cyborg than a goddess." – Donna Haraway 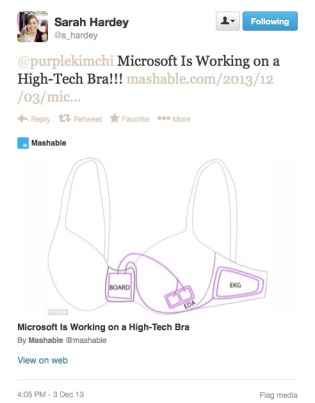 Earlier this week, Twitter user @s_hardey tweeted at me that Microsoft is working on a high-tech bra. The tweet came on a Tuesday, which is my busiest teaching day. Before I got a chance to check it out, it got buried in my mentions.

But today…today is an unexpected work-at-home day thanks to winter storm Cleon. So when I saw this PolicyMic article in my Tweet stream, it reminded me that I had never followed up on Sarah’s tweet and gave me the chance to check it out.

Microsoft Has Invented a Bra That Discourages Women From “Emotional Eating” – PolicyMic.

Nina Ippolito is responding to a research team’s project that used a phone app to track the relationship between women’s emotions and eating habits and then tried to use the app to intervene before emotional eating could occur. The intervention came in the form of a message that suggested deep breathing exercises. The third stage of the project developed a prototype bra that tracked the emotional state of the wearer based on vital signs. The data gathered by the bra did not result in an intervention. Instead, the purpose was to see how well the vital signs aligned with emotional state. The paper does not seem to indicate how the bra might eventually be connected to a strategy of intervention. Would it buzz? Shock? Connect to the wearer’s phone and the app? It’s unclear.

Ippolito’s critique of the Emotional Eating bra raises many interesting questions. Like Ippolito, I find myself hesitant about the researchers’ choice of which women’s health problem to solve. I suspect that emotional overeating is a problem for which the researchers felt that their wearable device presents a plausible solution. However, the device has problematic potential for policing women’s emotions and bodies in a culture that is already quite adept at doing so.

I am also puzzled by the bra in the context of the first two studies done by the researchers, which suggest that any attempt at intervention is complicated since stress is only one of many factors that contribute to eating for purposes other than hunger/nutrition. In addition, it seems like a significant number of the respondents felt that the standardized intervention of breathing exercises would not be effective for them.

It’s worth reading the original paper in addition to Ippolito’s critique. She says, “But surely someone, in the development of a gendered undergarment that seeks to help women control their emotional behavior, must have stood back and said, “maybe this is not a good idea,” or, “maybe we should put this in a different kind of garment,”. I agree 100%. But so do the paper’s authors. Well, at least with the latter one. They indicate that they’ve started experimenting with the Affectiva Q sensor bracelet as an alternative to the bra, which allows women and men to use the device. When I tried to do a bit more research on the Affectiva Q, I immediately hit a stumbling block. 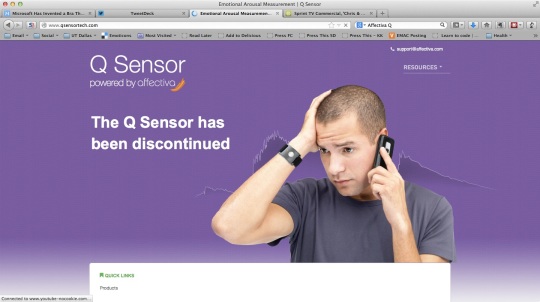 The paper was published in September 2013, but was likely written a while before that. Regardless, the device that the researchers label as a follow up to the bra has already been discontinued. It’s hard to know where the research team is in the process now, but as they indicated, they are interested in removing the gendered dynamic by working with a garment or accessory that men and women could use.

But even so, the bra and people’s reactions to it tell us a lot.

First off, it’s a lesson in internet source evaluation. As soon as I read a little past Ippolito’s piece I discovered a variety of conflicting accounts about the bra. The most laughable was perhaps the Elle.com piece with the headline, “The bra that tweets when you are having fast food cravings.” The bra does not tweet* and there is a big difference between “craving fast food” and emotional overeating. But the Elle piece is based off the Redbook account, which is based on Mashable‘s article…you get the idea.

The best treatment of the bra is Eric Niiler’s story at Discovery News. Niiler appears to have interviewed Mary Czerwinski, a member of the Microsoft resarch team who worked with University of Rochester’s Erin A. Carroll and University of Southhampton’s m.c. schraefel on the three studies.  In addition, Niiler complicates the narrative of women as emotional eating by also interviewing Gudrun Sproesser, who suggests that emotional eating may not be a cause of concern. In “The Bright Side of Stress-Induced Eating,” Sproesser, Schupp, and Renner find that those who over eat when emotional, eat less when in a good mood or under less stress. Niiler quotes Sproesser as suggesting that emotional eating is not necessarily a negative behavior that requires such vigilance. This is a much appreciated intervention into the reductionist notions of gender and the framing of women’s emotions as pathological that occurs in so many of the other stories.

It is bad enough that stories about the bra reduce behaviors to essentialist notions of gender, or offer overly prescriptive advice about how women eat, or engage in outright misinformation. But even worse are…the comments. I know, I know, why on earth would I go and read the comments?

The responses to Ippolito accuse her of being fat, rail against the women who just can’t control their impulses, and berate her for being too negative about a well-intentioned device to help people make better choices. Recently in talks about my Fashioning Circuits project I have been talking about the peculiar quality of vulnerability for women in digital publics. Hostile responses to women in online environments range from misogynist vitriol to threats of rape and murder. Mostly here they are the former, but it is disturbing to see how quickly the comments become ad hominem attacks on Ippolito based on her gender.

Over on Mashable, there is a bit of the same, but another interesting facet emerges, which is the assumption that the researchers and dev team are men:

Screenshot of Mashable Comment with name purposefully left off.

One comment reads “Microsoft…as a shareholder it looks like it is time for me to dump the stock. This is just stupid. The guys in MSFT Research don’t have better things to do than sitting around fondling bras?” Another jokes, “That thing is straight from hell! It has to have been led by a male-dominated design team. Oh wait, it’s Microsoft — of course it was a male dominated design team.” What the first commenter fails to note is something that Ippolito points out amid her snarky comments: that the point of the research project was likely less about overeating and more about whether affect can be accurately tracked and behavior can be modified with wearable media. Both commenters assume that the designers were men, when in fact women are prominantly featured as part of the design team. The three lead researcers are Erin A Carroll, Mary Czerwinksi, and m.c. schraefel and all three are women. This is an interesting example of the implicit bias that women often face in IT spaces. It’s not hostile. In fact, we may even label it as well-intentioned. But these attitudes still have an impact on expectations regarding gender in computing.

The bra itself is definitely problematic. However, we can learn just as much by looking at the way people write about the bra, the way readers respond to the bra, and the assumptions they make about the research team. All in all, this particular piece of electronic lingerie reveals more than just a little skin.

*There is a tweeting bra. It’s just not this one. The tweeting bra was developed by a Greek advertising agency as part of an awareness campaign for breast cancer self exams.

2013 at The Spiral Dance. Thanks for a great year!